Default out-of-the-box booting on WinPE with SCCM 2012/2016 is very slow. In some environments I’ve seen this take 3 hours to download the Boot.Wim. This is because System Center Configuration Manager 2012/2016 uses small TFTP block sizes of 512 bytes.

This behavior is set because it’s compatible with all network configurations; but the result is that the PXE boot speed can be very slow using Operating System Deployment with SCCM. 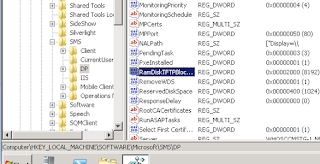 On this particular PXE-DP the time to download the boot.wim increased by roughly 80%

To my knowledge this feature has been built into CB1606 but I have not moved there yet to test myself.

In part 1 I talked about the overall design of my WaaS implementation and some background on how I got there. WaaS – Overview of WaaS the Wolverine Way Here I’ll go into details on the “Phase 0” portion of the process...