Peter Vanhaverbeke
Add comment
5 min read
The Distribution Point Migration toolkit can be downloaded from my Technet Gallery HERE
This post is a long time in coming, but creating something robust enough to work in most environments that’s still user friendly (with associated documentation) can take a little bit of time.  In the course of one contract I’ve worked, we realized that we needed a way to convert old Secondary SCCM sites into Distribution Point, but we wouldn’t be given any new servers to migrate to. We also knew that the WAN links connecting these remote sites back to our headquarters were severely lacking.  Our solution was to prestage all the content currently stored on the content libraries so we could strip off all the roles (which would clear the SCCM content library), remove unneeded programs and features, add the servers back as Distribution Point, and then reload the prestaged content so it wouldn’t have to transfer over our unspeakably slow WAN connection. We got a peek at this work with my last post of the SCCM Universal Prestage script, but this post will give you the other pieces of the puzzle.

Initialize-Toolkit
This is the first function you call if you’re running the Migration Kit from a PowerShell window you didn’t summon up from inside the Configuration Manager console.  This function will verify that you have Administrator rights, will seek out and import the Configuration Manager module, and will map your CMSite PSDrive if you don’t already have it mapped. This function is also called within every other function after a quick check to make sure that the CMSite drive is mapped.  If it isn’t mapped, it calls the Initialize-Toolkit function and maps it.

After the drive has been created
Get-DPContent
The second function in the toolkit will query our primary site server and return a list of all content that is assigned to the distribution point we provided.  There are multiple ways to get this information. I’ve seen it done with Get-CMDeploymentPackage cmdlet since that will also return package type information that we’ll need later.   However, I chose to do it via the SMS_DPContentInfo WMI class because I find that it returns the same level of information, but does so in roughly 1/3 the time.  It also means that you can run the command without needing to be connected to the CMSite drive if you don’t want to fully initialize everything.

A simple report of package ID’s and names

An example of the data stored by SMS_DPContentInfo
Prestage-Content
This is one of the ‘heavy lifters’ of the toolkit.  This function requires a package ID number, the Distribution Point containing the package, and the folder you want it dumped to after creation. What this creates is a PKGX file named with the package ID of whatever you prestaged.  The way it decides what to prestage is based on the PackageType value that comes from WMI’s SMS_PackageBaseClass. Again, you can get a package type identifier from Get-CMDeploymentPackage if you’d rather go that way, but I like WMI.  Once it’s pulled the PackageType value, it runs it through a SWITCH command and runs the appropriate Publish-CMPrestageContent command.  I don’t do any special logging with this function since Publish-CMPrestageContent already does a good job of it.

Prestaging multiple packages with a For Loop
Restage-Content
This function is one of the main reasons I like to save my prestage files with the PackageID as the name.  You input the folder containing the prestage files as well as the name of the Distribution Point they need to be assigned to, and this will get the package type information for that package, run the same switch as Prestage-Content, and issue the Start-CMContentDistribution command with the appropriate flags.  Just to save time, it will also query the Get-DPContent function to make sure that it isn’t trying to reassign packages that are already assigned.

Packages were already assigned in SCCM

Package distribution in progress
Extract-Content
This function calls upon Microsoft’s ExtractContent.exe tool to run, and is designed to be run locally from whatever DP you’re importing the package to.  The only flag you need to specify is the location of the prestaged content folder.  It takes the hostname of the computer it’s running from and makes a WMI query to see any packages assigned to it that aren’t in State 0.  If the package shows as state 0, then there’s no further work to be done, and we can just work on the others.  There are multiple ways you can run the extractcontent.exe tool, but I’ve found some to work better than others.   Whether you run it specifying a single package to extract or you run it with an entire folder targeted, I’ve found that when I check the Distribution Point Configuration Status in the SCCM console, there’s always some that still show “waiting for prestage content.”  In almost every case where that’s happened, just re-prestaging the content cleared it up. I don’t know if this is a limitation of the extractcontent.exe tool, my impatience, or what, but it works for me.  Because of that, I actually have my Extract-Content function run through the Prestage content folder one item at a time, so you can re-run the function, it will re-query for unsuccessful packages, and only attempt to extract the packages that didn’t make it the first time. 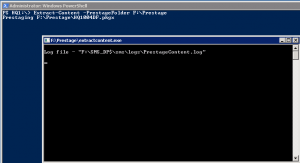 Stage-LocalDPContent
I put this together for our SCCM architect who wanted something that he could quickly and easily run while logged into our Secondary Site Server that was being migrated.  What this does is query the local DP for all assigned content, export it with the Prestage-Content function, and give you a progress bar to show you how far along you are.
ALSO CHECK : Universal SCCM Content Prestager

I started my journey into automation out of laziness. It started with our desktop support lead telling us we needed to manually install Office 2013 on 250 computers and me downloading a copy of PsTools. I moved on from batch to PowerShell several years ago and haven't looked back. Don't even come at me with some VBscript you found online because VBScript was given to mankind by the devil.
Most days, you can find me writing scripts for people in exchange for bottles of reasonably priced Gin or drinking a growler of something local while playing Kerbal Space Program.

I’ve now consulted to about half a dozen environments where we have leveraged the feature update approach for windows servicing. I’m seriously considering every upgrade forward to be done this way instead of...