This particular Counter script started out as a project tasking.   The request was simple, if not vague: find out why our computers are so slow.  Rather than remoting into a bunch of random computers and then taking screen shots of Task Manager, I came up with the following script: Download

I’ll walk through some basic examples of what the parameters do, and then delve into how they do it.

This example runs the Counter script against a remote system, it runs for five minutes, and it takes one sample every 5 seconds.  We’re not looking for any specific processes here, so it’s going to capture from the master list embedded in the script itself.   When it finishes running, the script will not only dump a CSV report containing the highest (or lowest where relevant) values, but it will also dump the raw data it collected.

This time, we’re still going into a remote system, but we’re specifically looking for the TaniumClient process.  While we are only capturing that one application process, the script will always capture basic system performance counters such as hard drive activity, memory usage, and CPU usage.  Also, we’ve redirected the log file to a new location.  Because we didn’t specify a monitor duration or frequency, it falls back to the script defaults of one minute duration with counters captured every two seconds.

Alternatively, you can run this script against a list of systems via a simple loop. Combined with the start-job cmdlet, you can quickly collect performance data from a wide range of systems.

But How Does It Work

Starting with the parameter block, here are the basic items I’ve decided we would want to change:

The first thing we might want to change is the target computer. Since I was frequently running this script against a computer I was already logged into, the default value is left as the local computer.  While you can run this with “hostname” or even nothing at all, but because this generates a report at the end, having the actual computer name matters.

Monitor duration and sampling rate are pretty much what they sound like: how long do you want to monitor the computer and how frequently are you checking your counters.

Log Path is similarly self explanatory.  This is a root folder more than a specific name since if you’re doing multiple computers at a time, I didn’t want to specify a log file name.

Target Process is where you specify what process you’re trying to monitor. If you don’t specify anything, it will monitor everything on the master list I’ve hard coded into the script.  This was based on a list of all the processes we thought would significantly impact system performance.  If you do specify a process, it monitors that process as well as some basic parameters like hard drive, memory, and CPU usage.

This section is all of the basic counters I want to track whether I’m after a specific process or not.  Also, this sets our $startTime variable, which we’re using for logging purposes.

After the generic counters comes the massive list of counters we were tracking on a generic system scan.  I’m not going to paste them here, but they include everything from antivirus to Tanium client and SCCM.

This section actually takes all of those processes in the list and generates the four different counters we want to track for each one. If I don’t use a function like this, we just end up with a colossal list in the script itself, and nobody wants that.

Now we’re getting into what actually does the work.  We’re using our get-date cmdlet to track time along the way, just in case something hangs. We’re also declaring our different arrays for holding information.  I also have it give me a count of the counters and processes, mostly for diagnostic purposes. If something looks off, it probably is.  This is also where we do a bit of math to tell the Get-Counter cmdlet how many samples we’re taking. Since it only handles integers, we have to round it to 0 decimal places.  After the math and setup is complete, we get the counters from our target computer, log when we finish, and dump the raw data as a BLG file that you can open later in PerfMon.

Here, we are taking that raw data and converting it to an object array that is easier to search later.   Again, this outputs some diagnostic information just in case something looks off during the conversion.

In this specific case, we wanted the most “significant” value for each counter over the measured time period. For available memory, that would be the lowest number, for a process CPU usage counter, it would be the highest number.   We find each uniquely named counter, look for everything that has that name, and then find the most significant value for that name.  Once we have it, we save it to our reporting array.

This generates the log file based on the parameters you provided earlier. If you were monitoring a specific process, this will name the log file based on that.  Otherwise, it just uses the computer name. The date and time are stamped on as well for future reference, and a spreadsheet is generated for later processing by managers who like spreadsheets.   If your IT department is like ours, you probably already know which processes are killing your CPU cycles, but this will let your manager know that you’ve done due diligence.  I hope this helps, and it sure beats taking screen captures of Perfmon for hours on end.

Below is an example of what we found on a test system. From the screenshot we determined that Tanium was no Bueno. 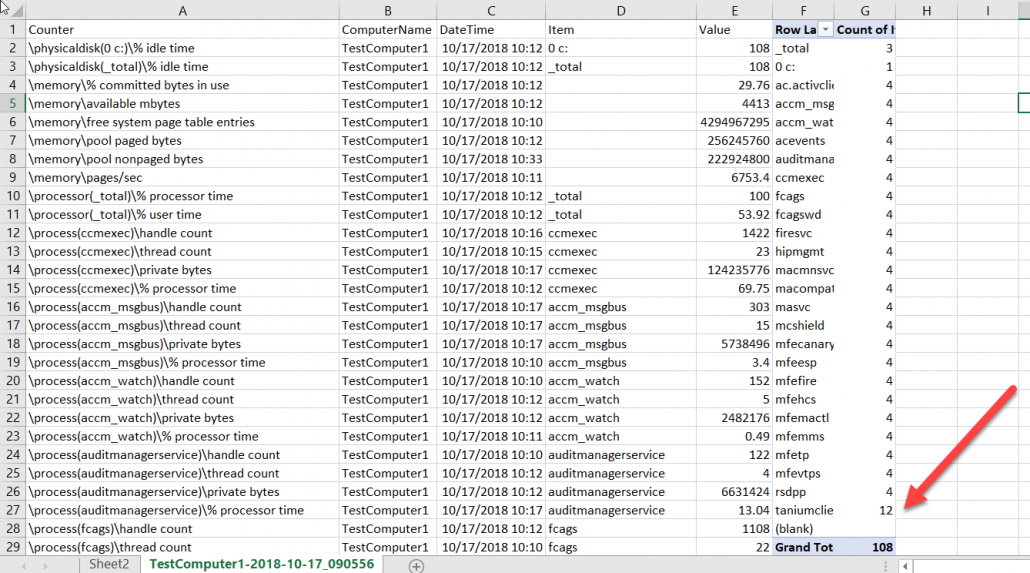 ALSO CHECK : We should talk about incremental collection updates…

I started my journey into automation out of laziness. It started with our desktop support lead telling us we needed to manually install Office 2013 on 250 computers and me downloading a copy of PsTools. I moved on from batch to PowerShell several years ago and haven't looked back. Don't even come at me with some VBscript you found online because VBScript was given to mankind by the devil.
Most days, you can find me writing scripts for people in exchange for bottles of reasonably priced Gin or drinking a growler of something local while playing Kerbal Space Program.

Utilizing Identity Governance to delegate local admin permissions for Hybrid and Azure AD Joined devices Note: I am not a security expert. I do not know the security practices used in your environment. This article...

In this scenario the customer is trying to image systems from within WinPe. They are able to select a task sequence, but then once policy dependencies evaluate the customer receives the “An error occurred while...