Earlier in the 2017 year I was at a customers site where they had 60+ task sequences. This customer had a specific TS for each model they supported, and for each scenario. This was eventually reduced down to 3 task sequence primarily by the use of WMI Queries.

This will return the system model information so I can take a look at what potential problems exist.

This will return the current bios version running on the system. For my current customer we noticed the 840 G1 touchscreen laptops would exit the TS and have display issues unless we flashed the bios to at least 1.39 while being imaged connected to an ultra slim docking station

—
For Task Sequence
We started to combine the task sequences into 1 by use of WMI queries. There would be individual driver installation steps based on each mode.

select * from win32_computersystem where Model like “%HP EliteBook 840 G1%” 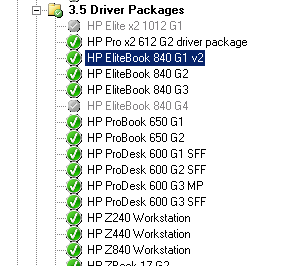 We can see when we query status messages that only the step to install 840 G1 drivers was ran due to the WMI query.

For Bios Flash
I like to create an If statement to include model information combined with specific bios version. This will allow me to target only systems that are not up to the approved baseline. Running with the configuration below we get a return of 5 – 8 minutes per system by being able to avoid this step.

select * from win32_computersystem where Model like “%HP EliteBook 840 G2%”

FOR VPN
useful for deciding to ignore


ProTip
make sure you always test query. I have seen in a previous customers environment while reviewing status messages that several model machines were failing domain joins b/c the driver packs were not being installed due to bad wmi queries. This was a problem the customer faced against 40% percent of their supported models.

In part 1 I talked about the overall design of my WaaS implementation and some background on how I got there. WaaS – Overview of WaaS the Wolverine Way Here I’ll go into details on the “Phase 0” portion of the process...